On a cold winter morning my husband Bruce and I were sitting in our kitchen and eating our usual Saturday breakfast of muffins and cheese omelets. I looked out our kitchen window and noticed two woodpeckers sparring on the trunk of the driveway black walnut tree. At first I thought they were our yard red-bellied woodpeckers, but after looking through my binoculars, I realized that one was a male red-bellied and the other a male hairy woodpecker. 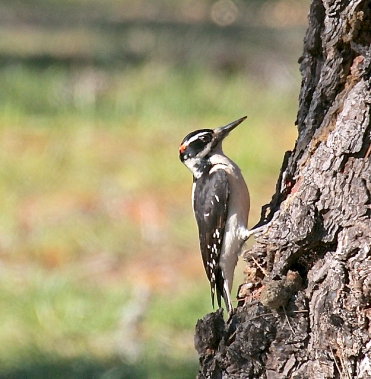 A portrait of a male hairy woodpecker (Photo by Teddy Llovet on Flickr, Creative Commons license)

Finally, the hairy retreated to the open ground around the black walnut tree where he poked in it for a couple minutes before flying off. I wondered if the red-bellied might have been defending his stash of seeds and nuts shoved in the crevices of the black walnut tree trunk and if instead the hairy had acknowledged defeat by searching for pieces of black walnuts on the ground.

During the fall and winter, hairy woodpeckers eat mast– acorns, hazelnuts, and beechnuts—but I imagine black walnuts are acceptable since hairies also consume a variety of seeds and nuts at bird feeders including cracked walnuts, pecans, and sunflower seeds. Still, I was surprised to see hairy woodpeckers in our yard since they prefer a forest of large trees, although they will live where there are mature shade trees in small woodlots, wooded parks, cemeteries or residential areas.

A female hairy woodpecker with a berry in her beak (Photo by Dave Chase, 2012 Photo Contest, Seney NWR, on Flickr, Creative Commons license)

They also come readily to bird feeders in such residential areas, but they don’t come to our feeders on a central Pennsylvania mountain. Our feeder woodpeckers are red-bellied and downy woodpeckers. Those same species nest in holes in our yard black walnut and black locust trees. The hairies prefer our mature forest trees for foraging because the larvae of wood-boring insects make up 21 to 41 percent of their food throughout the year, along with ants, spiders, millipedes and beetles as well as wild berries and mast.

But during last winter’s warm February and early March, hairy woodpeckers visited our yard. First the male hairy revisited the plowed area, poking his bill repeatedly in the thawing ground. Then he flew into the driveway walnut tree and climbed to the top before flying away. He returned a couple days later with a female hairy and both, along with the yard red-bellied pair, busily poked in the open yard for food through a re-frozen earth.

In late February, I heard and then found a pair of hairy woodpeckers high in a tree on Greenbrier Trail engaged in courtship behavior, extending their necks, their bills pointing upward, bobbing their heads from side to side and flicking their wings as they circled the tree trunk. I doubted this was our yard-visiting pair because studies show that in a mature upland forest such as ours, a territory is on average 6.5 acres and Greenbrier Trail is a half mile from our home.

On the other hand, during the winter, hairy woodpeckers in Michigan have territories of 800 acres, which is larger than our square mile property. Furthermore, while some studies find that a pair of hairies have separate winter territories and renew their pair bonds in early spring, other studies find that pairs remain together throughout the winter.

A woodpecker meet-up—a hairy and a northern flicker having a dispute (Photo by Dan Streiffert on Flickr, Creative Commons license)

In early March our yard-visiting pair joined a woodpecker meet-up near and on the driveway black walnut tree. Presumably, the hairies, along with a pair of downies and the red-bellied pair, were interested in the nesting cavity 30 feet high in the tree. Finally, the hairies retreated to the ground, poked their bills at the black walnut remnants and flew away.

That was the last they appeared in our yard, but I continued to see and hear the explosive “peek” calls of hairies in our forest the rest of the year. I knew from hairy nests I had watched that they favored high, dead, wild black cherry tree limbs here for nesting, and once the dead limb of a large black locust tree. I’ve also seen pairs in our mostly oak forest, and until the second half of the nestling period when the nestlings are incredibly noisy, the adult hairies are more wary than the smaller, look-alike downy woodpeckers.

A downy woodpecker (left) on a feeder with a hairy woodpecker (Photo by Paul Hurtado on Flickr, Creative Commons license)

Some researchers believe that downy woodpeckers evolved mimetic plumage to avoid attacks from hairy woodpeckers, the so-called “Hairy Woodpecker Trickery” hypothesis. But a recent study of hairy and downy woodpecker interactions at the feeders of Project FeederWatch observers by three Cornell Laboratory of Ornithology scientists seems to disprove that theory. They found that downy woodpeckers were often the target of hairy woodpeckers and chased the downies from feeders. However the downies were unusually dominant when competing with birds larger than them such as northern cardinals. The scientists hypothesize that downies may use their resemblance to hairies to fool other species into believing they are hairies, the so-called “Innocent Bystander Trickery” hypothesis.

Both woodpeckers have white breasts and backs, black-and-white striped heads, black wings spotted with white, and clear white outer tail feathers, but the hairy woodpecker is about nine inches to the downy’s six, has a much heavier and longer bill and usually lacks the black markings on the outer tail feathers of a downy. The males of both species have a red patch on the back of their heads and the females do not. 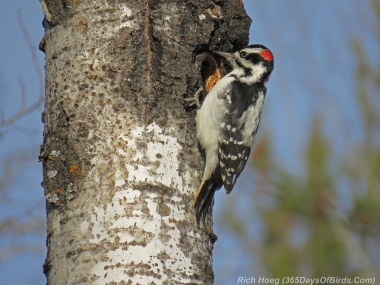 Here on our mountain hairy woodpeckers begin to excavate nest holes in mid-April. The male does most of the work because his bill is 10 percent longer than the female’s. They mate during nest-building and egg-laying. Their nest cavity is dug in a dead or dying tree limb five to 40 feet from the ground, and it is 10 to 15 inches deep, with an entrance hole 1 ¾ to 2 inches in diameter. Its base contains a soft bed of wood chips on which the female lays six to eight white eggs. Both parents incubate the eggs, the male alternating with the female during the day and incubating on his own throughout the night.

After 11 to 12 days, their altricial young hatch and remain in the nest for 28 to 30 days. But the adults switch from entering the nest cavity while feeding the nestlings to feeding from the outside when the nestlings are about 16 days old. Then the nestlings climb up to the nest entrance and the parents land on the limb and poke their bills, crammed with insects, into the bills of loudly chirping youngsters. That’s when I located three nests. However, their chirping may attract predators such as black rat snakes, predators on eggs and young, as well as eastern screech-owls, European starlings, house sparrows or red-bellied woodpeckers—all predators on hairy woodpecker nestlings. The nest hole is too small to admit raccoons and gray squirrels, and adult hairies keep them away with their formidable bills. 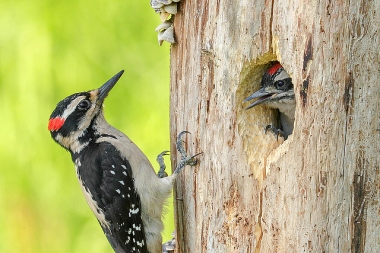 An adult male hairy woodpecker outside a nest hole with a juvenile male inside (Photo by Mick Thompson/Eastside Audubon on Flickr, Creative Commons license)

The parents were also noisy when I watched their nests, emitting loud, rapid-fire “queek, queek, queek” calls for 10 minutes or more whenever I entered their territory and announcing their impending arrival at the nest with far-off calls, which caused their nestlings to chirp even louder. The parents even engaged in “demonstrative drumming” on nearby trees to protest my presence.

When the nestlings are old enough to fledge, the parents use a couple methods to entice them from the nest. One is to hold food out of reach, forcing them to lean out a little too far, and the other is to starve them, making them so hungry that they tumble out. Then the parents continue to care for them as long as six more weeks which is why they have only one brood a year.

A hairy woodpecker at a feeder in Danville, PA (Photo by fishhawk on Flickr, Creative Commons license)

Hairy woodpeckers are common and widespread throughout their continent-wide range, and in Pennsylvania their numbers increased from the first to the second breeding bird atlasing periods. The highest densities are in the forested areas of central and northern Pennsylvania and the lowest in the Piedmont and other areas with sparse forest cover.

With an estimated 97,000 hairy woodpeckers in Pennsylvania, we should have ample chances to observe these fascinating birds in our forests, wooded yards, and at our bird feeders throughout the year.