For years I have wanted to see the wintering short-eared owls of Adams County, especially after reading an article in National Wildlife about the dozens of these owls at a farm in the winter of 2005. But as the years passed, it seemed as if the large numbers had dwindled.

A short-eared owl at the Seedskadee National Wildlife Refuge in Wyoming (Photo by Tom Koerner/USFWS on Flickr, Creative Commons license)

Then, in early March, I caught a note on the Pennsylvania bird listserv, about short-eared owls wintering in fields near Gettysburg. My contact there provided precise directions and armed with Google maps, my husband, Bruce, son Mark, and I headed south on March 8.

We reached the Gettysburg fields after lunch—apparently too early to see the short-eared owls. Still, Bruce wanted to make sure of the location. Even then a couple cars were pulled to the side of the road, and folks were scanning the fields with binoculars, but one watcher told us the owls were most likely to appear shortly before sunset.

Unlike our home in the mountains where snow still lay a foot or more deep, the fields were mostly brown, with only here and there patches of icy snow. First we spotted an adult bald eagle flying over the fields. Then we watched a hunting red fox as it leaped repeatedly on prey we assumed were the ever popular prey animals—meadow voles. A northern harrier sat on the ground, probably also eating a vole. Two American kestrels flapped past. And Mark pointed out a rough-legged hawk perched in a tree overlooking a fallow field. Apparently, these grasslands of Adams County were producing a bonanza of food for both raptors and foxes. But would there be short-eared owls?

We needn’t have worried. Returning to the short-eared owl field by 5:30 Daylight Saving Time, we joined the line of cars parked along the open sides of the large fields on Pumping Station and Cunningham roads. Already some folks had their scopes set up. A northern harrier coursed low over the field, and in a tree along the edge of the field, a red-tailed hawk perched.

A short-eared owl that has landed on a post (Photo by Rick Leche on Flickr, Creative Commons license)

Then, seemingly out of nowhere, at 5:50 p.m., three short-eared owls appeared, flying close to the ground, diving down and then sitting in the field, their heads swiveling about in search of food, their bodies lit by the lowering sun. Eight minutes later, two more owls appeared, their reddish-brown backs glowing in the light. One landed on a fence post across from a nearby parked car.

People emerged from their vehicles when they realized that these owls weren’t bothered by spectators. They even seemed to pose obligingly for photos. We too eased out of our car and set up our scope. Several times a couple of the owls flew across the road in front of the parked cars.

At one point, a car moving slowly down the road stopped, and the woman driver asked me what everyone was looking at. She was a local landowner and was not aware of the owl extravaganza that had been playing out nearby. When we explained and pointed out the owls, she joined the parade of watchers.

Our scope brought the owls eye-poppingly close, but soon they flew so near, fluttering like overgrown moths, that they filled our binocular lenses. We were even able to distinguish the lighter colored males from the darker, buffier females. In neither case could we see the short ear-tufts for which they are named. They have nothing to do with ears but are tufts of feathers on top of their heads, which they erect at the slightest sign of danger.

Their ear openings are asymmetrical. This allows them to hear prey in both ears, and they can target it when they dive after it head first as some of the owls we were watching did. But only one caught a vole. Instead of eating it, though, it continued carrying it as it flew around. Even when the owl finally sat down on the field, I could not see it eating, but since they often swallow small mammals whole, I might have missed it.

As quickly as they appeared, they disappeared after sunset into a nearby roost, probably the line of trees at the far edge of the field. I was elated that at last I had seen these charismatic owls, but not, unfortunately, the more than 45 owls the National Wildlife writer saw back in 2005. Still, it was reassuring that at least a few short-eared owls were still living their winter lives in Pennsylvania.

Only a few breed here in what is the southernmost limit of their nesting range in the northeastern United States. Known also as “bog owls,” “swamp owls” and “farm owls,” historically they nested in bogs and large marshes in a few widely scattered sites in Pennsylvania, primarily in Lehigh, Berks, and Crawford counties. But habitat loss restricted them, by 1966, to a known 50-acre field near the Philadelphia International Airport. Eventually, in 2005, that field was developed into an airport cargo hub.

By then, birders in northwestern Pennsylvania had discovered tiny nesting populations on reclaimed surface mines, most notably in southern Clarion County, which has remained the core of its range since the mid-1980s. Not only in Pennsylvania, but elsewhere in northeastern United States, the loss or degradation of marshes, grasslands, and grassy fields 100 acres or more, which are their preferred habitats for nesting, has led to a declining population here of this circumpolar species that breeds in the Americas, northern Europe and Asia.

Later in March or early April, short-eared owl males perform what some researchers refer to as their “sky dance.” While a female sits on the ground, the male may soar as high as 500 feet above her calling “voo-hoo-hoo-hoo” as he does so. When he reaches the top of his climb, he dives earthward, stopping his plunge to clap his wings together a dozen or more times. Often he repeats his performance several times before landing on the ground where the female joins him and may mate with him.

The female scrapes out a ground nest on dry upland sites with knee-high grasses and lines it with grass and downy feathers. She lays an average of three creamy-white eggs over several days but begins incubating them as soon as she lays the first egg. Her mate feeds her and defends the nest area and later nestlings from predators while the female flushes reluctantly at the last minute, when she will join him in screaming, whining, barking and performing broken wing distraction displays. 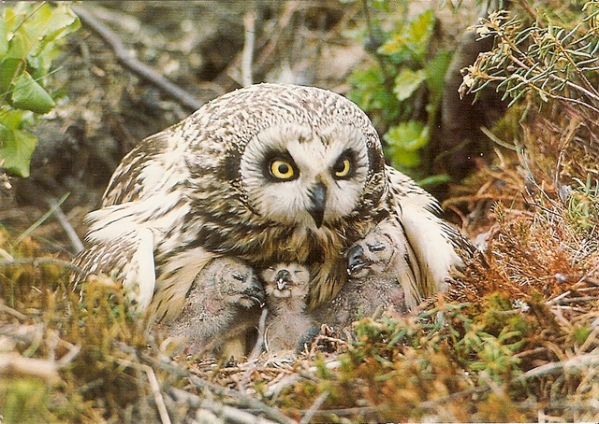 Short-eared owl female with nestlings huddled beneath her (Photo by Stephanie on Flickr, Creative Commons license)

Incubation lasts from 21 to 31 days, and once the eggs hatch, the nestlings develop rapidly, huddling beneath the female until they are nine days old. After that, they sit upright on the edge of the nest during the day.

She feeds them food provided by the male. While she tears it into smaller pieces for her young, they eat the same prey items as the adults, most notably voles and mice, but also shrews, moles, rabbits, muskrats, and even birds.

The young leave the nest on foot at 14 to 17 days of age and wander about until they can fly when they are 25 to 37 days old. Then they form a communal family group and roost together. 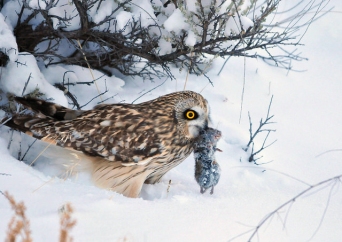 Whether or not an area has an abundance of small mammals seems to cause short-eared owls to shift their breeding and wintering sites. Here in Pennsylvania, a high vole population in nesting as well as breeding areas, may lead to larger winter roosts and populations and sometimes to more breeding numbers, for instance, in the summer of 1997, when young were found in Allegheny, Clarion, Jefferson, Lawrence, and Venango counties, almost all of which were on large tracts of reclaimed surface mines.

According to The Second Atlas of Breeding Birds in Pennsylvania (2004-2009), only five possible breeding sites—including two in Clarion and one in Lawrence counties—were identified. But just one breeding pair was confirmed in the Clarion County reclaimed surface mine where the owls had been confirmed breeding in previous years. In that case, observers reported seeing an adult short-eared owl carrying food, but they didn’t find the nest or young.

While the chances of seeing breeding short-eared owls in Pennsylvania may be slight, the grasslands of Adams County in winter provide owl-lovers with a marvelous viewing opportunity. To me, seeing those owls close-up will remain one of the highlights of my birding life.