A white-throated sparrow in Quebec (Photo by Cephas in Wikimedia, Creative Commons license)

By November most of our songbirds are gone. But at least a few white-throated sparrows, which nest farther north and have been migrating through here since late September, elect to stay instead of heading to the southeastern United States to spend the winter.

Not only do they stay, but they continue to whistle their plaintive “Poor Sam Peabody, Peabody, Peabody” song throughout the winter, a distinctive song that has led to many nicknames for this sparrow such as “Whistling Sparrow,” “Peabody Bird,” “Poor Kennedy Bird,” and “Sweet, Sweet, Canada bird,” among the literally dozens, in both English and French, that were unearthed by W.L. McAtee back in 1957.

To hear an example of their song, see an excellent video by naturalist and photographer Lang Elliott of some white-throated sparrows.

Our 37-acre First Field is especially popular with white-throated sparrows because of their fondness for grass and weed seeds as well as the fruits of wild grapes, dogwood and sumac during the fall and winter. I’ve also heard and seen them at the smaller, but equally overgrown Far Field as well as along Bird Count, Greenbrier and Ten Springs trails, all of which are in the 26-year-old, poorly logged, brushy area of our property.

Although a couple white-throats come to our feeder area, others are able to sustain themselves on wild foods during most winters. Only when the winter is particularly harsh do more white-throats, eager for oil and shelled sunflower, millet, milo and cracked corn, appear in our feeder area. Using both feet, they scratch up seeds that I throw below our back steps.

A white-throated sparrow in the snow (Photo by Dr. Thomas G. Barnes, USFWS, in Pixnio.com, in the public domain)

Here on our mountaintop we don’t have the wintering numbers of white-throats that stay in the valleys and lowlands of Pennsylvania, especially in the warmer southeast Coastal Plain and Piedmont regions. And when I studied my old Project FeederWatch records dating back to the winter of 1988-89, I was surprised to note that there were no white-throats until 1995-96 and then they only averaged 1 to 1.6 per visit to the feeders each winter until 2004-05 when the average shot up to 4.4 and 2005-06 when it was 5.6. After that, the feeder numbers averaged between 2 and 3 until the frigid winter of 2014-15 when there was an average of 6.7, the highest number ever. Last year’s mild winter pushed their average back down to the more normal 2.2.

Checking my journals, I also discovered that we have always had wintering white-throats in brushy, wet areas as well as the drier brush of the Far Field. Furthermore, I rarely see them during my walks, but I know them by their songs and their scolding “clicks” even as they remain hidden from me.

When they feed in flocks during the winter and even in feeder situations, they maintain a discreet distance from others in their flock, probably to avoid aggression with other white-throats. As a species, they give up space and food to blue jays, eastern towhees, northern cardinals, fox, song and most white-crowned sparrows but will dominate swamp and field sparrows and chickadees. 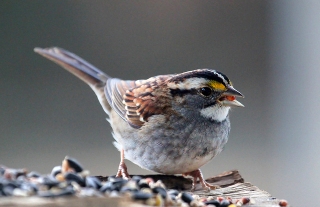 In white-throat winter flocks, males, old birds, and those that have returned winter after winter to the same area are dominant. They sing the most, feed close to protective cover, and are not often interrupted in their feeding by other members of their flock. Their winter home ranges are small, and they remain there even through midwinter when food resources dwindle.

My only time to study them is at the feeder area when they are out in the open. And it’s then that I can plainly see the two morphs or forms for which they are famous among researchers. Both do have white throats as well as yellow lores or spots in front of their eyes and grayish bills, but those with white and black stripes on their heads are known as white-striped morphs and those with tan and brown stripes as tan-striped morphs. Because each morph mates with its opposite, these differences remain from generation to generation.

A brown and tan striped morph of a white-throated sparrow (Photo by Cephas in Wikipedia, Creative Commons license)

Here in the eastern United States, white-throated sparrows (Zonotrichia albicollis) and their close congeners white-crowned sparrows (Zonotrichia leucophrys) can be mistaken for each other. But white-crowns have brighter white crowns edged with black, pink or orange bills, and no yellow lores. Still, all white-crowns have grayish-white throats and immatures have dark red-brown and light buff head stripes that resemble tan-striped white-throats, but the latter still have those distinctive yellow lores. Both species also have white wing bars on brown-streaked wings, backs and tails.

Except for their unique polymorphism, white-throats are much like other sparrow species. Although they breed mostly in the boreal coniferous and northern hardwood forests of Canada and the northern United States, northern Pennsylvania is the southern edge of white-throat breeding in the East, especially in the forested wetlands and shrub lands of northern Susquehanna and Wayne counties, the juncture of Lackawanna, Luzerne, Carbon and Monroe counties, on North Mountain in eastern Sullivan and southeastern Wyoming counties, along the border between Wyoming and Bradford counties, and in or near the Allegheny National Forest in McKean County according to Nicholas C. Bolgiano in the Second Atlas of Breeding Birds in Pennsylvania.

“The White Throated Sparrow, from Pensiluania, and the Yellow Butterfly, from Carrolina,” plate 304 in Gleanings of Natural History (1758) by George Edwards (In the public domain)

White-throated sparrows were first described back in 1760 in G. Edwards’s “Gleanings” and was based on a specimen from “Pensilvania,” so the species has a long association with our state. No doubt there were many more white-throats then when our state had a larger coniferous component in our forests, the climate was colder, and we had many more wetlands. Between our first and second atlasing periods, breeding white-throats had declined and were found in 33% fewer blocks, suggesting, Bolgiano writes, “that the White-Throated Sparrow may be contracting into a few core areas in Pennsylvania,” most notably North Mountain of Sullivan County, which he calls “an important stronghold for this species” in the commonwealth. He mentions our warming climate and the maturing of our forests as possible causes.

Since white-throat females winter farther south than males, males usually arrive on their breeding grounds a week or two ahead of the females and experienced males earlier than novices. Here in Pennsylvania breeding white-throats appear in mid-to-late April. They search for mixed forests with openings that have low, dense vegetation where they can hide their nests on or near the ground. They also establish and defend their 1.9 to 3.2-acre territories from other males.

Once the females return, they pair up and couples forage together, with the males protecting or perhaps guarding the females from other intruders. The females probably choose the nest site. They also construct their open cup nests of bulky materials such as coarse grasses, twigs, pine needles, and roots and line them with finer materials including fine grasses, rootlets, and deer hair. 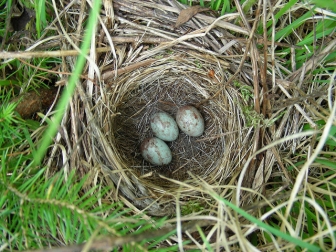 When their nests are finished, they lay on average four pale blue or cream-colored boldly brown-spotted eggs and begin incubating on the day the fourth egg is laid. Usually the females incubate the eggs for 12 days.

The young are born mostly naked and their eyes remain closed for the first three days. Their mothers do much of the brooding and shading of the nestlings, and they remain mostly still until they are seven days old. Then they call as their parents approach the nest with a selection of insects and spiders.

Both the eggs and nestlings are especially prey for red squirrels, eastern chipmunks, and eastern garter snakes. Other possible predators are red foxes, short-tailed weasels and short-tailed shrews. Predators on adults include merlins, sharp-shinned hawks, and short-eared owls as well as the mammalian predators.

The young leave the nest on foot at seven to 12 days of age, but they need another week before then can fly. Their parents continue to feed them and to defend them from predators by distraction displays such as a slow flutter-flight above the vegetation, a wing-drooping run while calling loudly, or a wings-up-walk where the parent seems to fall to one side while holding up one or both fanned wings.

The parents care for their young for at least two weeks after they fledge and sometimes even after the females begin incubating a second brood. But not much is known about how the young disperse.

Still, by September adults of both sexes and immatures have flocked together and begun their long, slow migration south for another winter in warmer climes.