As soon as we saw a sign telling us we were in Elk Country, five pairs of eyes scanned the landscape for a glimpse of the elusive elk. It was a cold, breezy day in early April and my husband Bruce and I, our son Dave and his English girlfriend, Rachel Rawlins, and our nine-year-old granddaughter, Elanor, were on the Quehanna Highway en route to Benezette, the well-known center of elk activity in Northcentral Pennsylvania.

These elk—Cervus elaphus—are the Rocky Mountain subspecies nelsoni, that were introduced by the Pennsylvania Game Commission between 1916 and 1926 in an area where the last of the canadensis subspecies had been exterminated in 1867 in Pennsylvania. Today our so-called North American elk are considered to be the same species as the Eurasian red deer. To further confuse matters, the European elk is our moose, which is why many biologists prefer the Algonquian name for elk “wapiti” meaning “white rump.” Currently in Pennsylvania there are approximately 900 elk.

Before we reached Benezette we stopped at the Marion Brooks Natural Area—number 3 on the Department of Conservation and Natural Resource’s Elk Scenic Drive map. We wanted to show Rachel the only state natural area named for a woman. As a citizen of nearby Medix, Brooks had been concerned about water quality in her area and helped to establish some of the first strip mine reclamation laws in the commonwealth. This 917-acre natural area is known for having the largest stand of white birches in Pennsylvania.

After a short walk among the birches, we returned to our car, eager to resume our Elk Country journey. When we reached Benezette, we followed signs through and out of town to Winslow Hill and on to the Elk Country Visitor Center. This impressive, new facility designed, as their website says, “As a place where visitors have an opportunity to see and experience these majestic animals year round in their natural habit” was the result of a public/private partnership between Pennsylvania’s DCNR and the Keystone Elk Country Alliance, a group of donors that included private foundations, most notably the Rocky Mountain Elk Foundation, the Pennsylvania Rocky Mountain Elk Foundation, and the Richard King Mellon Foundation, organizations such as branches of the Safari Club International, and private individuals.

On that cold day, in what is called the Center’s Great Room, a large stone fireplace burned wood and threw out needed warmth. No doubt it was using some of the same trees cut years ago on the property that power the Center’s Austrian-built Bio-Mass Boiler. Large window let in ample light and provide excellent views of the grounds where elk sometimes graze.

The Center’s interpretive and interactive exhibits educate visitors not only about elk but also about the surrounding environment, wildlife conservation, and its green building design. Elanor especially enjoyed the interactive quiz on elk, and the gift shop, where she convinced her grandparents to buy her a nature journal and a 3-D elk book mark. Rachel purchased elk jerky and sausage to take back to her sons in England. 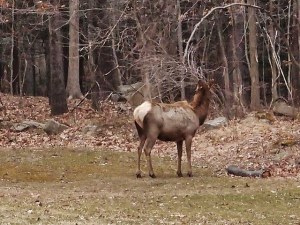 But enough of gift shops and displays. We wanted to see elk. We walked all three observation trails near the Visitor Center and had them to ourselves as sensible folks stayed inside and read about elk instead. We did find several piles of elk scat and tracks, which Rachel photographed, and admired designs lichens made on trees along the trails. Turkey vultures wheeled overhead and a robin ran across the lawn, both signs of spring despite the cold wind and snow pellets in the air.

Next we drove to all the elk viewing sites. Again, there was no sign of elk. By then we were hungry and found a café in Benezette where Rachel and Dave ordered elk burgers. As we lamented the lack of elk, a congenial white-haired gentleman in the next booth told us there were elk in town and gave us precise directions to a back street where they roamed.

At last we started seeing elk. Three sat together in one backyard chewing their cuds. One turned its head and gave us an excellent view. Three more grazed behind the Benezette Winery. Still in their winter coats, they were mostly a study in brown and beige. The tops of their heads were reddish-brown and the dark manes that hung to their chests looked like long shawls had been draped around their necks and shoulders. Their backs were beige and their legs a darker beige.

But Rachel, Dave, and Elanor were particularly fascinated by their light rump patches.

“They have heart-shaped butts,” Dave added.

Their little white beards were also a source of interest as they flapped about in the wind.

We were content to stay in the car and watch, but a couple at the winery walked toward them which put the elk on alert and as Dave said, “The elk are watching the watchers.” Finally, they ambled off into the woods, joining three elk that had stayed further away from the watchers.

At that point, we felt amply rewarded by our close encounters with these charismatic creatures. Instead of returning home on the Quehanna highway, we decided to follow the Elk Scenic Drive from Benezette to Renovo and then south to Snow Shoe to show Rachel more of the “Pennsylvania Wilds” as the area has been dubbed by the DCNR. And that’s when we really saw elk by the dozens, still in winter herds of both sexes, the larger males having shed their antlers.

In fields above the highway and beside the Bennett Branch of the Sinnemahoning Creek below the highway, we counted three elk in one field, eight in another, 11 in a third and five more on a field beyond Dent’s Run. Across the Bennett Branch elk grazed in backyards—nine in one yard, three in another. And they varied in color. Some had dark brown bodies and others were beige. Second only to moose in size, elk are five feet at the shoulder. The males or bulls head and body length averages eight feet and the females or cows seven and a half feet. The bulls weigh from 600 to 1,000 pounds and cows 400 to 600 pounds.

During the winter, like the smaller white-tailed deer, they are mostly browsers, feeding on woody stems, but if grasses, sedges, and forbs are available then, they’ll also graze on them. Many fields, especially in the viewing areas—Gilbert Farm or Winslow Hill, Dent’s Run, and Hicks Run—are planted with alfalfa, timothy, clover, and winter wheat.

Beyond Sinnemahoning, 14 elk and three white-tailed deer grazed on grass along the road, ending our elk-watching for the day. But from Benezette to our last sighting—25 miles in all—we had counted 53 elk, more than enough to convince us that elk are thriving in the Elk Country of Pennsylvania.

Later Rachel, in her inimitable British way, summed up her impression of elk on her Facebook page. “What weird creatures—the shaggy head and neck of a camelid, the beard of a Chinese sage, the body of a horse (with the gait of a rocking horse), the butt of a pig, and the tail of a severely docked dog. But delightful.”

FOR MORE INFORMATION: Embedded above is the Pennsylvania Game Commission’s excellent 33-minute video, Pennsylvania Elk: Celebrating 100 Years, which presents not only the history of elk in Pennsylvania, but the PGC’s intense and continuing efforts to revitalize land and water devastated by clearcut logging followed by strip-mining before those strip-mining regulations that Marion Brooks and others fought for were passed in the 1960s. To see the before and after photographs of Winslow Hill, for instance, is to marvel at land reborn through the sweat and toil of many PGC employees and other interested parties.