I used to fear the wind, especially when it roared on top of Sapsucker Ridge. But ever since Interstate 99 was opened, directly beneath the ridge, the wind has been my friend because it masks the traffic noise. 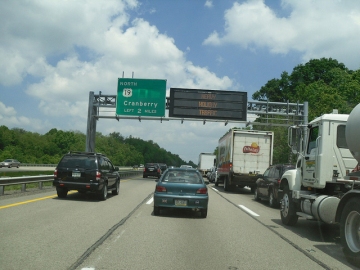 Heavy traffic on an interstate near Pittsburgh (Photo by Doug Kerr on Flickr, Creative Commons license)

During the winter, without the leaves on the trees to absorb some of the clamor, the interstate traffic is louder than ever. Researchers have found that at least six-tenths of a mile on each side of a road is affected by traffic noise, and a portion of our property is much closer than that.

Many humans are badly affected by continual anthropogenic noise, especially that made by roads, airplanes, and extractive industries such as fracking and mining.

In the last couple decades some researchers worldwide have been studying the effects such noise also has on wildlife, particularly birds. They’ve found that sounds made by vehicles, oil and gas fields, and urban sprawl can change the way animals communicate, mate, and prey on one another. 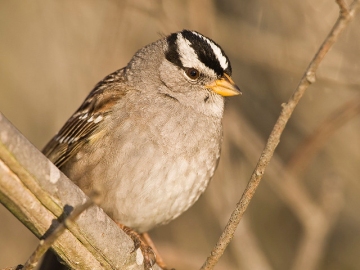 Back in the 1960s, ornithologist Luis Baptista recorded white-crowned sparrow songs in San Francisco and discovered that they sang in three distinct dialects in different areas of the city. David Luther, a George Mason University biologist, studied the same areas in San Francisco in 2008. The traffic noise was much louder in 2008 than it was when Baptista made his recordings. As a result, the white-crowns had raised the pitch and length of their songs to be heard above the urban din and sang in only one dialect.

Luther hypothesizes that, “With our loud noise we might be influencing the very evolution of these birds.” 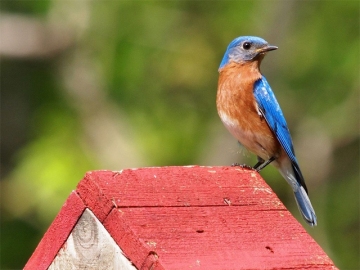 An eastern bluebird on a birdhouse in North Carolina (Photo by Ken Thomas in Wikimedia, in the public domain)

Eastern North America has little or no areas that are not affected by roads, and Pennsylvania has more than its share of them. Even a bird species seemingly unperturbed by roads—the eastern bluebird—appears to have problems with anthropogenic noise, according to a study of breeding eastern bluebirds in Williamsburg, Virginia.

The scientists concluded that their “study does provide evidence that bluebird fitness is being compromised at stages between egg hatching and chick fledging,” producing smaller brood sizes and less productivity, and thus “the birds will be particularly sensitive to noise during this (approximately) two-week time period.”

Other studies report such effects of noise on wildlife as hearing loss from noise levels 85 decibels or greater, masking so that wildlife can’t hear animal signals, predators, or other environmental cues, increased heart rates and stress levels, and even the abandonment of noisy territories.

Probably the most interesting study of road noise in the United States was conducted by Boise State University ecologist Jesse Barber and his graduate students in a roadless southern Idaho forest which had plentiful food for migrating birds. They created a “phantom” road by blasting national park road noise through speakers during fall migration. Thirty-one per cent of the songbird community avoided the area. Those that remained to feed couldn’t gain weight, probably because they were too busy looking for predators.

Barber also cited a study in 49 places worldwide where bird populations declined within six-tenths of a mile of traffic noise. Birds with low frequency songs, such as mourning doves, avoided roads altogether, since they couldn’t be heard above the hum of traffic. 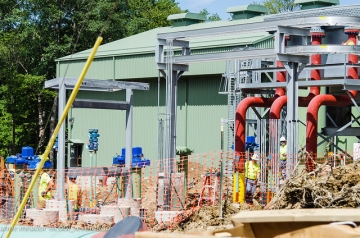 Compressor stations, such as this one in Milford, PA, bombard surrounding forests with noise (Photo by cool revolution in Flickr, Creative Commons license)

But roads aren’t the only noise problem that birds face. Studies in natural gas extraction fields found that compressor noise running 24 hours a day changes both breeding areas for songbirds as well as species’ numbers. Those birds that remain despite the noise may have trouble hearing songs or evaluating possible mates, parents may not hear chick noises or have less chance to forage.

In a study Barber and students did of 31 northern saw-whet owls subjected to recordings of a natural-gas compressor station, he reported that every time he raised the sound level by a decibel, the owls’ hunting success declined by eight per cent. Apparently, this owl species can hear sounds as low as negative 20 decibels while hunting for rodents, and when the researchers raised the volume to 60 decibels, the owls couldn’t catch any prey at all. Since all owl species depend on their ears and their eyes to hunt at night, we can only wonder how many other owl species might be impacted by noise.

Another interesting finding was that predators, such as western scrub-jays, avoided the noisy sites and preyed more heavily on nests in the quiet sites. Possibly they preferred the quiet sites because they couldn’t communicate over the noise of compressors.

The researchers concluded that “species intolerant of noise may suffer from not only exclusion from noisy habitats that might be otherwise suitable but also higher rates of nest predation relative to species inhabiting noisy areas.”

They go on to hypothesize that perhaps anthropogenic noise “may help explain the high degree of success among urban-adapted species [such as house sparrows, European starlings, and American crows, for instance] and the homogenization of avian communities in and around human-altered habitats.”

Still another study compared the nesting success of ovenbirds at compressor sites with those without. Although this study was done in boreal Canada, ovenbirds commonly nest in the forests of Pennsylvania and have always and continue to nest in our Laurel Ridge forest, which, unlike Sapsucker Ridge, overlooks a quiet, farming valley. If they still nest on Sapsucker Ridge, I can’t hear them above interstate noise.

An ovenbird on the ground (Photo by Trish Gussler on Flickr, Creative Commons license)

The ovenbird researchers discovered that the birds paired at a rate of 92% in the quiet sites and 77% in the noisy sites, probably because the females could not hear the males’ low-frequency “tea-cher, tea-cher” song as readily in the compressor sites. They add that most bird species in forests have low-frequency songs because they “provide optimal long-distance song transmission range in complex forest structures.”

Because of the steepness of Sapsucker Ridge on the interstate side, I have not been able to record bird species and numbers there during the several bird surveys I do here every year, most notably the Christmas Bird Count in December and the International Migratory Bird Count in May. I know that my own hearing is age-impaired, and I can’t hear birdsongs in the distance as I used to.

Since everyone who engages in various bird surveys depends on hearing bird calls and songs to identify them, ecologists in North Carolina wondered if declines in some breeding birds were due to background noise that interfered with the bird counters’ hearing.

The ecologists targeted a few of those experts who participate in the annual North American Breeding Bird Survey, the primary source for population and range information for over 400 species since 1966, and other experienced birders and played singing bird songs against varying levels of anthropogenic noise. Even a small amount of noise led to a 40% decrease in their ability to identify birds.

I can only imagine how many birds I miss every year.