The Guest House portico bat in 2007

Living, as we do, in an old country house, we often hear strange noises.

On an August evening, my husband Bruce and I sat in the living room reading. Shortly after 8:00 p.m., we heard unusual sounds coming from either the kitchen or sitting room.

We looked up at each other and then resumed reading. Both of us were engrossed in our books and didn’t feel like moving.

After all, many times we had investigated a noise and found nothing.

Then, there were more noises.

“I hope it’s not a bear,” I whispered to Bruce, remembering an attempted bear and cubs break-in back in June. “We’d better check it out.”

Because it was a wet night, it was already dark, and we couldn’t see a thing until Bruce switched on the sitting room lights. Then we ducked as a bat circled the room, narrowly missing the plates on our seven-foot-high plate rail.

Bruce opened the veranda door, but the bat continued its circling flight inside. As the minutes passed, I worried that mosquitoes, which had earlier driven us from the veranda, might get into the house.

But the bat was probably scooping up any that dared to enter and paid no attention to our feeble attempts to herd it out the door.

Location of the bat in the previous photo

Twice the bat barely missed the open door and once it landed for a few seconds on the wall, giving us a good look at its lustrous brown fur, but mostly it kept circling at plate rail height.

Bruce and I moved closer, he on one side of the door, I on the other, and I ducked reflexively every time the bat neared my head, even though I knew that its echolocation ability would keep it from hitting me.

Finally, it swooshed through the open door, and we breathed a sigh of relief. I was also elated that at least one little brown bat had escaped the white-nose syndrome (WNS), a fungus that has killed at least 95% of little brown bats throughout eastern North America since February 2006 when the disease was first discovered in a cave in Schoharie County, New York.

This cold-loving fungus Pseudogymnoascus destuctans only affects hibernating cave bats, which include the already Federally-Endangered Indiana bat, as well as the State-Threatened eastern small-footed bat, big brown bat, eastern long-eared bat, and tri-colored bat, but the little brown bat, also called little brown myotis, common bat, and cave bat, along with the eastern long-eared and tri-colored bats, is especially susceptible to the disease.

Dee Ann Reeder, A Bucknell University professor who has been studying bats in her bat vivarium even before the disease appeared, has been trying to understand how bats are affected and has been using little brown bats as her test subjects.

In a two-year captive study, she found WNS affected female little brown bats more than males and that bats kept in colder temperatures survived longer than those in warmer temperatures. 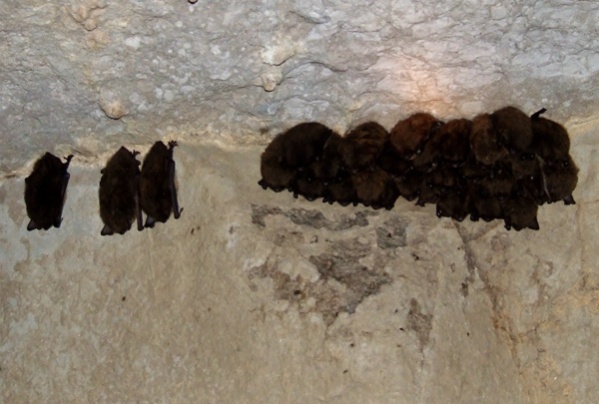 Reeder has worked closely with Greg Turner, PGC’s Endangered and Threatened Mammals Section Supervisor, to try to mitigate the disease, but this fuzzy white fungal growth around a bat’s muzzle, ears, and wing membranes thrives in winter hibernaculums—natural caves and old mines in Pennsylvania, such as the gated Hartman Limestone Mine at Canoe Creek State Park.

Back in 2008, when the PGC conducted its biannual count of bats at that mine, there were thousands of healthy, hibernating, mostly little brown bats. Three years later, they counted 38 total bats. And other hibernaculums throughout the state also contained few live bats.

Because bats cluster together in winter hibernaculums, the disease spreads easily from bat to bat. WNS causes them to rouse every few days instead of every few weeks as they used to do. The small size of little brown bats means they have less fat reserves to begin with so they quickly lose their fat reserves and starve.

They also lose more water through evaporation, and when they emerged, starved and dehydrated, for instance, from the Hartman Limestone Mine, they ate snow. In addition, little brown bats have suppressed immune systems during hibernation, which makes them more vulnerable to the fungus. Thus, once nicknamed the common bat, they are now rare. 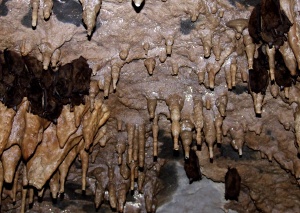 Hibernating bats among the stalactites in Woodward Cave

Scientists say the best case scenario would be a full recovery of the bat population in 200 years! As of April 2015, the cave bats in 26 states and 5 Canadian provinces have been infected with WNS and still the disease rages westward at a frightening pace.

This is a huge wildlife disaster, certainly the worst in my lifetime, and all because some cavers, probably from Europe, where cave bats have evolved with the disease, brought the fungal spores over on their clothes.

Lately, there have been a few bright spots in this dismal picture. In 2014 the Hartman Limestone Mine cave bat count was 155, and this year 71 bats. Although the numbers are still low, according to Greg Turner, bats are coming into hibernation heavier, even the few juveniles, and they have fewer skin lesions on their wings. They also spread themselves out in hibernaculums. But all such changes may be due simply because there are few bats left to compete with for food and space.

Knowing all this, I welcomed our little brown bat visitor. One bat eats between 800,000 and 1 million insects a year including moths, wasps, gnats, midges, beetles, mayflies and especially mosquitoes, scooping up prey with its wings while flying or grabbing prey with its mouth.

Little brown bats have both day and night roosts during spring, summer and early fall. They like to roost near ponds, lakes, rivers or streams in buildings or trees, under rocks and woodpiles, and in caves. Females and their young occupy warm nursery roosts in natural hollows, buildings, such as old churches, at Canoe Creek State Park, for example, and attics.

A bat on the side of a concrete block outside our barn, 2007

They sleep almost 20 hours in a 24 hour cycle, saving their energy for when insect prey is most abundant—from dusk to two to three hours later and again for a shorter period before dawn. Flying at between 13 and 22 miles an hour, they hunt their prey using echolocation, a process in which they orient themselves by emitting high-frequency sounds and then interpreting the reflected sound waves.

They mate in autumn before hibernation, but fertilization occurs after the females emerge from hibernation the following spring. After a gestation period of 50 to 60 days, a single pup is born to a female in late May or early June.

Born with their eyes closed, the young hang in the nursery roost while their mothers hunt for food. The rest of the time, for two weeks, they cling to their mother’s nipple until they are two weeks old. At three weeks of age they learn to fly, and a week later they are adult-sized—between 3.1 and 3.7 inches with a wingspan of 8.6 to 10.5 inches.

Female little brown bats are larger than males, but all adults need to eat half their body weight each night, and new mothers more than their body weight. One study in New Hampshire of pregnant and nursing mothers found that they ate 7 insects per minute.

Before WNS, we could sit out on our unscreened veranda even after dark and rarely see or hear a mosquito. A few male little brown bats roosted in our barn and in openings under our roof and the guesthouse portico roof. We often watched them flying over our field and imagined them scooping up water from our stream.

Close-up of the little brown bat in the previous photo

Now the mosquitoes force us inside every evening. Farmers, who may not have realized how many harmful insects bats eat, will be forced to use more pesticides.

Little brown bats have few predators, although occasionally a snake, raccoon, skunk, or cat may enter a hibernaculum and kill a few. They’ve also been caught on barbed wire fences or in burdock bristles.

Before WNS, humans wiped out entire cave or attic nursery populations, but bat education by dedicated people such as Cal Butchkoski, a wildlife biologist for the PGC who spent countless hours at Canoe Creek State Park and other venues, presenting excellent programs on bats, and Environmental Educator Heidi Mullendore at the park who organized several successful Bat Festivals there, had begun to change peoples’ minds about bats. The PGC had also gated many vulnerable winter hibernaculums throughout the commonwealth.

Now it is illegal to kill even one bat of any species. With 6 million gone, “every bat we find is precious and needs to be conserved,” Dee Ann Reeder says.

All photos by Dave Bonta.